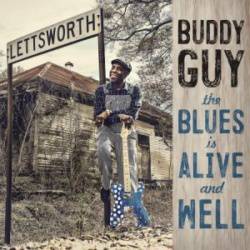 “The Blues Is Alive And Well”

There is but one Buddy Guy, and he’s an absolute beast of the blues, with his Chicago based blues guitar playing heavily influencing everyone from Jimmy Page and Eric Clapton to Jimi Hendrix.

There are two scenes in Martine Scorsese’s Rolling Stones concert film, Shine A Light, that perfectly encapsulate the musical pecking order – Jack White smiling like a six year old in a sweet shop as he gets the chance to sing along with his heroes, followed by the sheer jaw dropped admiration that the Stones have in the presence of the mighty Buddy Guy. Keith Richards was so moved by the experience that, at the end of his spot, he handed over his guitar in homage.

On his new album he shows us that he’s as dynamic as ever, his stinging lead lines whipping off the fretboard like swarms of bees chasing the honey sweetness of his supercharged and intensely emotional singing style.

Joined by a clutch of seasoned session players such as the wonderful Willie Weeks, along with the Muscle Shoals Horns on a few tracks and some special guest appearances from the likes of Mick, Keith and Jeff Beck, this album is an absolute scorcher.

As he sings on the autobiographical album opener, “Just a few good years Is all I need right now”, and for anyone who has the slightest interest in the blues, let’s hope his wish comes true as he just keeps on showing us what it’s all about.

And the album closer, just the man, his voice and his guitar, is a pure distillation of the good, the bad, the happy and funny, the sad. It’s the blues.

The album title says it all.