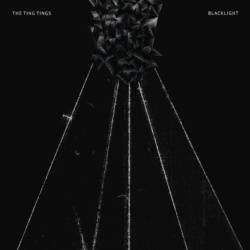 The Ting Tings are an elecro pop duo (Katie White and Jules de Martino) from the UK whose infectious pop ruled the British airwaves in 2008.

Ten years and three albums later, they have shunned listener expectations and done an almost complete about face from their previous breezy pop.

The Black Light, as its title suggests, is an altogether much darker affair than anything they’ve previously released.

It’s sparse, almost empty, in its musical foundation, a simple synth riff and a bass drum with the slight brush of a guitar sweep, such as on the prowling Earthquake, often being all that’s offered to support White’s film noir vocals.

Fans and critics alike seem to be annoyed at this change, wishing for last decade’s sound, but this album is a look inward with nary an eye toward the charts and the ugly beautiful view just might not be to everybody’s taste.

An adventurous album that sets the Ting Ting rule book aflame, The Black Light take you down to a place where the colours are shades of black and white, the atmosphere still and close, the only movement the flecks of dust caught in the black light.

It’s not a simple listen but it’s an intriguing one, the songs scattering out of the speakers like half formed thoughts, arrangements sketched in pencil grey, choruses repeated like uncomfortable mantras, particularly on the twitchy Word For This.