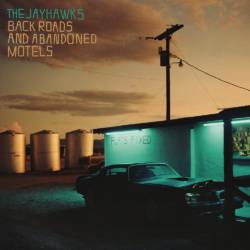 “Back Roads and Abandoned Motels”

The Jayhawks have been together for over 30 years and, putting it quite simply, they have absolutely nothing to prove.

So, it comes as little surprise that chief Jayhawker, Gary Louris, has decided to do something a bit different with their new album.

His modus operandi for this particular project is to pull together a collection of songs that he has already written with other artists and that, more often than not, have been previously released by his cowriters.

Which lends an air of whimsical familiarity to this album as it’s not only their familiar honeyed harmonies and wistful playing that taps us on the shoulder with a knowing ink, it’s the songs themselves.

The trick is that none of these have been smash hits, so there’s also a chance that you may only have heard them once or twice before, if at all.

Collaborators include the likes of Jakob Dylan (Gonna Be A Darkness), the Dixie Chicks (Everybody Knows and The Bitter End) and Ari Hest (Bird Never Flies), as well as a couple of his own new offerings.

Recorded in just two sessions, the sound is relaxed and marvellously simple, letting the songs themselves be the stars.

This is subtle, sunlit music that follows its own strange and wonderful muse.

Easy to like and one that lovers of melodic pop with a country tinge will surely love.